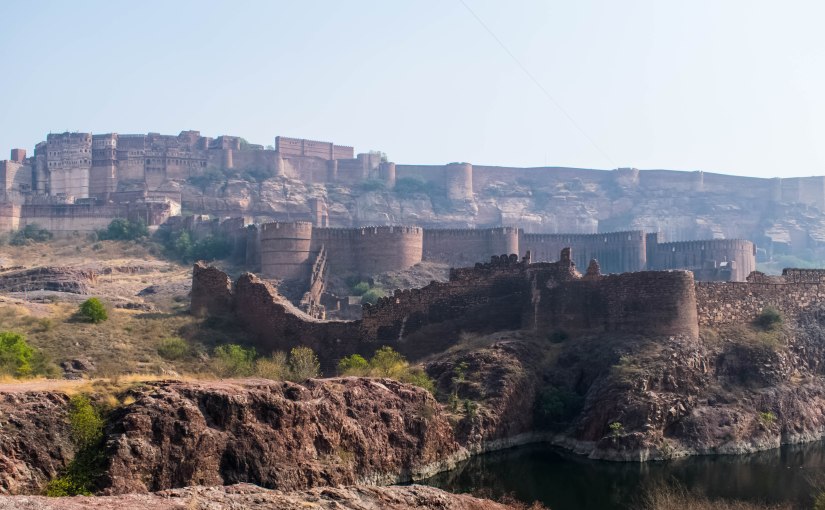 My initial plan before leaving to Pushkar was to meet my cousins in Jaipur and board the bus to Manali. I was hesitant to travel solo across Rajasthan, for its association with forts and museums hardly sparked any interest in me. Being a nature lover, it did not resonate with my idea of travelling. Imagine a schoolboy asked to sacrifice his Sunday for a trip to the museum. How boring! But as a traveller, I often find that happiness lies just around the corner when least expected. This time, my cousin did not want me to run away in the mountains. Instead, he insisted me, or rather should I say, forced me to board a bus to Pushkar. Jodhpur was the second destination of the same tour. After a 5hr long journey on a local bus from Pushkar, one may find his mind commanding to rest but as I arrived at the goStops hostel, I instantly felt rejuvenated. The employee at the reception, being a travel geek himself, ended up sharing his stories while I tried to gather all the information about Jodhpur as if I was to start exploring the city right away! In such a friendly atmosphere of like-minded people, conversations flowed and the bond formed easily with the staff and tourists alike. Lost in sharing the joy of travelling, the night seemed to be young and smiling at us.

The last night’s experience paved the way for a morning to look forward to. After entering the fort and obtaining a ticket, I excitingly put the headphones (with a remote given for the audio tour) like a crown, imagining myself as a king who is out on an inspection of the fort. My friend Nico- an Australian fellow whom I met at the hostel- and I decided to explore the city together. As the soft morning sun expanded its rays from the imposing walls of the fort to the ground, I felt terribly small and weak to comprehend my position as a king.

I immediately shun all my imaginations and pressed the no. 1 button on the remote. The audio guide welcomed me and introduced me to the Rathore dynasty and their glorious years of the past. It instantly teleported me to the age when the kings claimed themselves to be the descendant of God!

The audio tour further guided us to the interiors of the fort. As we marched closer to the courtyard, there were tourists dancing to the tune of the musicians who were playing traditional instruments. Many local visitors found this a good opportunity to gather around Nico and click photos with him.

While the audio guide described the details present in front of me, my mind kept flickering between the present and the imagery of the past. Sometimes, I was a part of the subjects enjoying the celebration in the courtyard; while on the other occasion, I was the king discussing the important strategy with the chiefs in the courtroom or resting in my “larger than life” personal chamber. The vast display of swords adorned with precious stones and ancient inscriptions, daggers, spears, guns, howdahs, etc took me to the battlefield where cavalries charged at the enemies on giant elephants and horses, and where Rathores displayed their strength and valor! I peeked into the lives of queens who traveled in closed palanquins. They were not given much freedom to engage with other men/subjects of the kingdom and lived in a separate quarter with their friends. I looked outside at the tourist crowd from the latticed windows from where the queens observed the ceremonies and royal assemblies taking place in the courtyard while remaining hidden from the public view. The architecture and the strength of the buildings, paintings of Gods from various mythologies, floral carvings on the walls and ceilings, etc piqued my curiosity to learn more about them. It made me appreciate the knowledge of architectures and artists of that time and sympathize with the efforts of laborers. My eyes popped out in awe looking at the bright colors and decorative royal rooms with stained glasses imported from other parts of the world. It was quite evident that mightier than the planning, architecture, and art was the money involved in construction!

Visiting the Mehrangarh Fort helped me understand the idea of true Royalty which is a combination of wealth, health and knowledge, tradition and devotion, scientific and logical analysis, art and nature; which seems to be missing in our modern culture as it fails to maintain such a perfect balance.

After spending a major part of the day at the fort, I repented at the thought of not touring across Rajasthan. I am grateful to my cousin who helped me unveil my preconceived opinion and explore the places with an open heart. “Never shall such bizarre thought cross my mind again!”, I affirmed mentally.

In the growing travel age, where all of us are aware of the wonderful quotes and ideologies of travel, it is here that I realized the true meaning of a traveller. A good traveller is not the one who sticks to a travel niche and keeps ticking off the places from his checklist. A good traveller is an opportunist, who challenges his own perceptions and is ever hungry for new experiences. After all, it is the experience that one relishes about the place and not the place itself. Isn’t it?